By Admin December 26, 2012
Considerable discussion has taken place during the Centers for Medicare and Medicaid Services (CMS) resource calls about which process to use when computing episode payment rates for low-volume Diagnosis Related Groups (DRG).  This is an issue because Bundled Payment for Care Improvement (BPCI) applicants are required to participate for all DRG severity levels within a selected episode definition, even though the applicant may have extremely low volumes for one or more of those DRGs.  Low episode volumes cause inaccuracies in calculating average prices and may create inappropriate advantages or disadvantages for the provider if its historical costs were extremely high or low.

To correct for this, CMS is evaluating an approach that has two components;  first, the introduction of geographically-based averages to “correct” for the small sample size of an individual provider, and second, the use of the empirical Bayes statistical technique to create the varying proportions for blending the provider’s historical cost with the average regional cost.  Another approach has apparently been suggested to CMS, which is to use a longer base period of provider history to increase the sample size; however CMS appears to be favoring the empirical Bayes approach.

There are two issues with the Bayes approach.  First, it assumes that use of the geographic average improves the accuracy of the target price over a price that which would be set based solely on the providers historical cost for low-volume DRGs.  This assumption may not be true.  Episode cost variations among hospitals across a geographic region occur for a variety of reasons, most notably the difference in post-discharge care which can be based on the availability of post-acute providers such as rehabilitation hospitals and skilled nursing facilities.  The graph below shows the average cost per episode for DRG 470 (a DRG with a relatively low coefficient of variation) across hospitals having more than 100 episodes of that DRG. The red bar shows the average cost across the hospital referral cluster (HRC). The coefficient of variation across these hospitals is 8%, meaning that substituting the geographic average for the hospital actual average cost could introduce an error (at a 95% confidence level) of almost 16%.  Hospitals whose actual cost was lower than the geographic average would have a built-in advantage of this amount, while hospitals on the other side of the cost curve would have this difference as a built-in disadvantage. 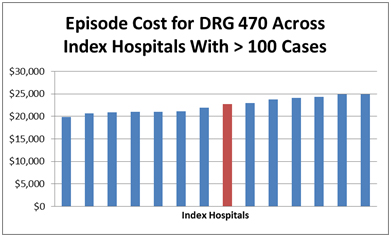 This effect can reverse the incentives for potential participants in the BPCI program.  Without a geographic component of the target episode cost budget, participants would prefer to participate in DRGs in which their costs are higher than other hospitals, since this excessive cost may indicate an opportunity for cost reduction.  However, when a geographic average becomes part of the target payment budget calculation, the opposite incentive is created.  Under that scenario, hospitals would participate in DRGs in which they are a lower cost provider because they will have an automatic cost advantage.  This is contrary to the original concept of the BPCI.

The second problem with this approach is the use of the empirical Bayes technique, as opposed to a more transparent arithmetic approach.  For most participants, empirical Bayes will be a “black box” that cannot be duplicated and therefore assessed for its accuracy and reasonableness.  Applicants may be wary of participating in the program in which rates are set using a process that cannot easily be analyzed or understood.

An alternative to the empirical Bayes method has been proposed that utilizes a much simpler approach. This approach computes a regional or nationally-based weight from the episode cost of all DRGs, and applies those weights to the average episode cost for each participant across all DRGs to compute the cost for each DRG. In this way it develops an “index number” for the cost of each DRG, similar to that DRG weights use in the inpatient prospective payment system.  The formula for that method appears as follows:


This alternative is a significant improvement over the empirical Bayes method that uses regional cost components because it avoids the issues described above.  It does, however, retain one negative aspect in that it does not utilize the applicant’s historical cost for DRGs that have a sufficient sample size to create reliable pricing.  In our opinion, adjustments should only be used for low-volume DRGs; high-volume DRGs should always be based upon the applicant’s historical cost. Under the alternative method, changes in case mix could create advantages or disadvantages for the applicant, depending on which way the case mix moved.

To avoid this issue, we proposed to CMS a different variation of the calculation, which would only be used to estimate episode cost for low-volume DRGs.  In our method, national ratios are developed between the episode costs of DRGs within the same group, relative to the cost of the highest volume DRG.  For example, the average cost of DRG 469 would be computed on a regional or national basis relative to the cost of DRG 470, which has a much higher volume.  This relationship would be utilized for applicants who do not have sufficient volume in DRG 469 by applying the resulting ratio to the applicant’s cost for DRG 470.


The advantage of this method is that it would retain the applicant’s historical average costs for most of the DRGs, substituting estimated values only for low-volume DRGs. This would retain historical accuracy and avoid the effects of changes in patient mix.

With the current emphasis on computing weights for individual DRGs within the same DRG family, another payment alternative may have been overlooked.  In this alternative, an average payment rate is computed for all DRGs within the same DRG family (without complications, w/CC and w/MCC), and that average is applied to all cases within that family. It effectively eliminates the differences in complication levels of patients. Under this alternative, participants would create a financial advantage by lowering their case mix, which would occur by having relatively fewer patients in the more complicated DRGs.  Since creating incentives to reduce complications should be a goal of any payment system, this payment system would meet that goal. It would also eliminate the incentive for upcoding, since there would be no increased payment for patients with higher-severity DRGs.  However, it will also create risk for participants whose severity mix increased beyond their control, since payment for more severe cases will be identical to that for less severe cases.  Such a payment system may be considered in future bundled payment initiatives, but given the risk adversity of current applicants it appears to be less likely to be adopted for current payment systems.

CMS has indicated that the proportion of the target developed from geographic data will be greater for DRGs with smaller sample sizes and larger amounts of variation; however CMS has not yet made a final determination of the methodology. It will be important to monitor the decision on this process, since introduction of geographic adjusters to DRGs in which historical data may provide reliable averages may create some of the errors and biases described above.

--------
To assist applicants in understanding the implications of recent changes to the BPCI structure, DataGen and Singletrack Analytics are preparing a series of articles dealing with some of the changes that are being implemented in the second phase of the application process.  These articles focus on analysis of the data, and on quantitative and financial aspects of the BPCI payment model. This article focuses on adjusting the episode payment targets to account for low volumes.  Subsequent articles will deal with quantification of the risk assumed by BPCI participants due to random variation in patient selection.  Please see our previous articles about the effect of outliers on risk and shared savings and the introduction of new required DRGs.

DataGen has partnered with Singletrack Analytics, to develop an analytical toolkit and consulting assistance for BPCI applicants. Our organizations specialize in payment system analytics and modeling, and assisting provider organizations to quantify and measure risks and returns under various systems of payment.  For more information about these services, contact Gloria Kupferman (DataGen) at GKupferm@hanys.org or Jon Pearce (Singletrack Analytics) at jon@singletrackanalytics.com.  Comments or questions about these articles are welcome.

Popular posts from this blog

By Marketing June 18, 2021
As we emerge from a global pandemic, accountable care organizations must address key new trends now to maintain progress toward value-based care and mitigate financial risk.  Analytics are key to helping ACOs gain a better understanding of trends so they can identify opportunities to drive quality improvement. These trends include: gaps in access to clinical care;  shifts in patient volume; increased demand for virtual care; and  social determinants of health challenges.  To better understand rising trends and actions providers should take, we will reach out to hospital and health system leaders to discuss how recent trends influenced their decision to adopt value-based contracts. Then, during our July 28 webinar, we will release a comprehensive market report on these trends and implications for the future. Preventing gaps in access to clinical care Advanced payment models incentivize ACOs to deliver high-quality care and close gaps in care for patients, thereby earning shared savings
Read more

ACOs must act now to get ahead of MSSP changes

By Marketing June 08, 2021
Redesigned MSSP program The Medicare Shared Savings Program, one of Medicare’s largest alternative payment models, allows providers and suppliers the opportunity to form an Accountable Care Organization. It was redesigned in 2018, establishing “Pathways to Success” as a way to restructure participation and encourage ACOs to transition to two-sided risk models.  As part of this rule, a BASIC track was established for ACOs to begin participation under an upside-only risk model and to incrementally phase into a two-sided risk model through a glide path. The glide path is composed of Levels A through E, in which there is progressively greater financial risk and potential opportunity for savings.  It is critically important for ACOs to understand how their level of participation in MSSP will change in the coming years. COVID-19 impact on MSSP advancement The COVID-19 public health emergency has disrupted efforts to improve population health and care coordination, and has resulted in a lack
Read more