Another round of major healthcare financial cuts is possible—and their impact could be devastating.

As healthcare policymakers and analysts try to mitigate the high cost of healthcare in the United States, payment reform is already making an impact on the way provider organizations do business. DataGen recently released projections revealing the impact of cuts made in Medicare payments to hospitals and hospital systems across the nation over the last 16 years.

These cuts were partially offset by the coverage increases under the Affordable Care Act (ACA). As the new administration turns its attention to healthcare, however, there are more potential cuts on the table. If these cuts are enacted—and if done so while the coverage expansion provided by the ACA is repealed or changed—healthcare organizations face a major risk of a massive decrease in funding. 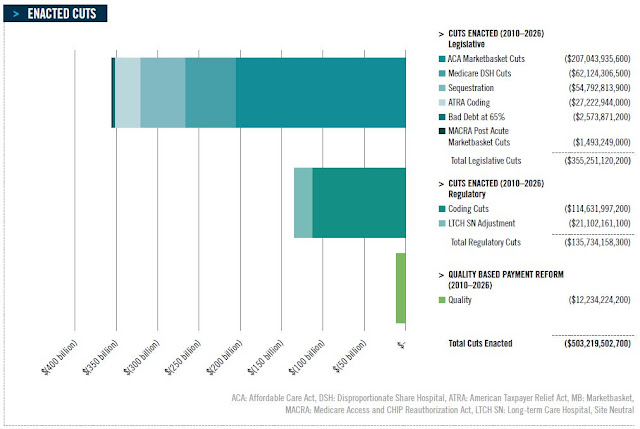 Nationally, of the funds allocated from Medicare to reimburse providers for the care of the elderly and disabled, 14% has already been cut—amounting to more than $500 billion in reductions between 2010 and 2026. These cuts can broadly be broken down into three categories: legislative, regulatory, and quality-based payment reform.

More than 40% of these cuts—$207 billion in all—include reductions in the cost of living adjustments that providers need to keep up with the increasing cost of providing care.

Medicare Disproportionate Share Hospital (DSH) payments, which represent 12%—$62.1 billion, were cut with the expectation that expanded coverage would ease some of the burden of caring for these vulnerable populations, representing payments to providers serving a higher mix of poor, uninsured, and underinsured patients. 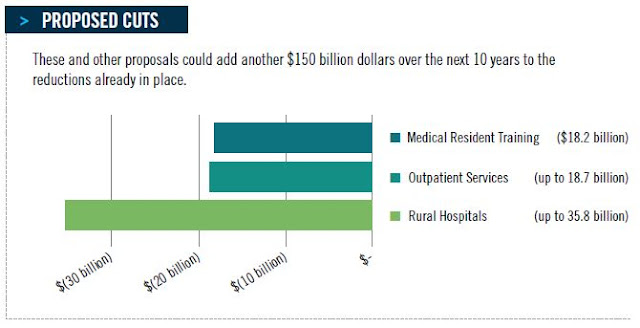 DataGen also released information on the potential impact of multiple additional cuts under consideration but not yet enacted. The ever-increasing national debt, combined with the fact that healthcare makes up over 25% of federal spending, leaves little room for doubt that at least some of these proposals for spending cuts will be adopted.

Hospitals that train medical residents face the possibility of $18.2 billion in reductions for that critical function over the next ten years—an issue that’s especially daunting with looming doctor shortages creating additional anxiety. While outpatient services have represented an increasing proportion of revenue as hospitals are pushed to provide more care without admitting patients, payments for those services could be cut by up to $18.7 billion.

Rural hospitals that provide care for patients who don’t have access to another hospital face potential reductions of up to $35.8 billion. In total, these and other proposals could add another $150 billion over the next ten years to the reductions already in place.

The healthcare community has already absorbed $500 billion in cuts—and the proposed cuts are making many providers wonder where it will ever stop. If coverage expansion goes away, as the initial replacement for ACA proposed, providers do have a real reason to worry about their financial sustainability. That doesn’t mean there’s nothing to be done about it, though.

Providers have already been lobbying their congressional representatives heavily to express the impact these cuts will have on day-to-day operations. While this effort seems to have gotten some traction, it’s important to keep the pressure on. We at DataGen believe that the new administration is beginning to understand the interconnected nature of healthcare policy and financial regulation—and is seeing that these cuts will cause reductions in the labor force, negatively impacting communities, employees, and patients.

Also, visit our Resources page and follow us on LinkedIn for more learning on healthcare payment reform.

Popular posts from this blog

By Marketing June 18, 2021
As we emerge from a global pandemic, accountable care organizations must address key new trends now to maintain progress toward value-based care and mitigate financial risk.  Analytics are key to helping ACOs gain a better understanding of trends so they can identify opportunities to drive quality improvement. These trends include: gaps in access to clinical care;  shifts in patient volume; increased demand for virtual care; and  social determinants of health challenges.  To better understand rising trends and actions providers should take, we will reach out to hospital and health system leaders to discuss how recent trends influenced their decision to adopt value-based contracts. Then, during our July 28 webinar, we will release a comprehensive market report on these trends and implications for the future. Preventing gaps in access to clinical care Advanced payment models incentivize ACOs to deliver high-quality care and close gaps in care for patients, thereby earning shared savings
Read more

ACOs must act now to get ahead of MSSP changes

By Marketing June 08, 2021
Redesigned MSSP program The Medicare Shared Savings Program, one of Medicare’s largest alternative payment models, allows providers and suppliers the opportunity to form an Accountable Care Organization. It was redesigned in 2018, establishing “Pathways to Success” as a way to restructure participation and encourage ACOs to transition to two-sided risk models.  As part of this rule, a BASIC track was established for ACOs to begin participation under an upside-only risk model and to incrementally phase into a two-sided risk model through a glide path. The glide path is composed of Levels A through E, in which there is progressively greater financial risk and potential opportunity for savings.  It is critically important for ACOs to understand how their level of participation in MSSP will change in the coming years. COVID-19 impact on MSSP advancement The COVID-19 public health emergency has disrupted efforts to improve population health and care coordination, and has resulted in a lack
Read more